After 5 years of miscarriages, a termination for anencephaly, and endless tests and procedures in different hospitals, I finally had a successful 12 week scan in February 2014 after visiting a private miscarriage specialist in Harley Street who diagnosed high natural killer cells and prescribed a concoction of different drugs. I was absolutely delighted but also extremely anxious about something going wrong, although of all the things I worried about, having a premature baby did not cross my mind.

I suffered with swollen hands and feet and very itchy legs, and was really uncomfortable sleeping, but delighted to finally be pregnant ‘properly’. I had just about started to relax and believe that I would actually have a baby at the end of it, and was thinking about what I needed to buy, when I went into premature labour at 27 weeks for no apparent reason.

I started feeling uncomfortable after having a glucose tolerance test on the Friday morning (16 May 2014), but thought I was constipated after fasting for the glucose test and then eating a fancy meal out on the Friday evening at a black tie dinner in London. I had to stand on the train home from London as it was too uncomfortable to sit down. I felt uncomfortable all night, hardly sleeping and unable to eat even a slice of toast due to nausea. I couldn’t eat anything or even stand up in the shower in the morning, but still drove myself to pregnancy yoga thinking I was constipated. The pain got worse through the class and the yoga teacher told me to get some fybogel after the class so I drove to Tesco to get some. I could hardly move when I got home, and couldn’t eat anything, and only a bath made the pain feel better. I then started leaking down below and texted my friend who said that was normal in pregnancy, although she said later that she should have realised it was a ‘show’. My now ex-husband came home to find me hunched over on the bedroom floor screaming in pain, so we went to A&E at Stoke Mandeville at 6pm on the Saturday evening, having been (unknowingly) in labour for 24 hours already. They immediately sent me to the labour ward. I didn’t even think I could be in labour as it was so early (13 weeks early!). Looking back now, it was obvious I was in labour (thank you to ‘One Born Every Minute’ for providing all I knew about labour!).

The moment they told me I was 7cm dilated and the baby was coming was the most terrifying moment of my life, and I was absolutely hysterical and screaming that it was too early and they must be wrong. They literally had to pin me down on the bed and wheel me into the labour room where about 20 healthcare professionals came running in. I knew nothing about premature babies or neonatal units, but was scared out of my mind that the baby I had waited for for so many years was going to die.

I had no clue what to do to give birth as my antenatal classes hadn’t started yet, and I screamed for what felt like hours. I was given steroids to mature the baby’s lungs and drugs to slow down the labour, which worked for a few hours. My contractions then didn’t work properly and I was getting more and more agitated and my blood pressure was dropping dangerously low, but just as the doctor was on the phone to the consultant getting the go-ahead for an emergency c-section, Ellie was born naturally on Sunday 18 May 2014 at 5.13am weighing an apparently healthy (for her gestation) 2lbs 7 ounces. 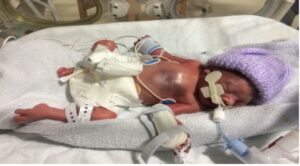 She was taken straight from me and ventilated and put into a special plastic bag to keep her warm, and we were only told after about half an hour that she was a girl and that she was alive, although she had a collapsed lung. I didn’t get a look at her or a first cuddle or hear her cry as I had imagined would happen when I gave birth, as she was taken to the neonatal unit to be prepped for moving to the John Radcliffe, as she needed intensive care which could not be provided at Stoke Mandeville. In the meantime I underwent a horrendous 2 hour ordeal to remove my placenta which had started sinking back into my uterus as my pregnancy had ended so early. I then found myself on a post-natal ward in a wheelchair with a catheter, no longer pregnant and with no baby, in a very surreal situation, and I had trouble processing everything that had happened in the previous 36 hours. I was wheeled down to the neonatal unit at lunchtime to see her briefly before she was transferred to the John Radcliffe. I had to text my boss to say that I wouldn’t be coming back to work, and one relative was so shocked at the news that they hung up on my ex-husband to try and process what they had been told!

I didn’t see her again until 24 hours later when I was discharged from the post-natal ward. I was able to hold Ellie for the first time when she was 5 days old and the ventilator was removed, and it was amazing to finally cuddle her properly. This was also when she cried for the first time, which sounded like a tiny kitten mewing. She was so tiny that her head fit in the palm of one of my (small) hands, but she was perfectly formed and absolutely beautiful.

Then I was suddenly thrown into a completely alien and scary world of de-sats, bradys, medication, baby forgetting to breathe, beeping monitors, tube feeding by syringe, changing nappies through the holes in an incubator, expressing milk, blood tests, research trials, daily doctors’ ward rounds, constant hand washing and waiting for security doors to be opened so I could get to my baby. It was frustrating having to be helped by a nurse to cuddle my baby while she had wires connected to every part of her. Ellie spent 2 weeks at the John Radcliffe before being transferred back to Stoke Mandeville for another 9 weeks. I learnt so much new terminology in those weeks and was able to comfort and explain things to new parents as they arrived on the unit.

I was with her all day every day for those 11 weeks, and I expressed milk day and night as I knew it was the best thing for her. I did tube feeds and nappy changes every day, learning to breast feed when she was at equivalent to 34 weeks gestation, and spent time with the doctors and nurses explaining everything that they were doing. I had many dark days and found myself in tears in the parent’s room on several occasions, mainly out of frustration at the situation and not being able to look after my baby myself, and just because it was such an intense experience. It was such an intense all-consuming experience that is hard to describe to anyone who hasn’t been in that situation. I took great comfort from another mum who had a baby at 27 weeks at John Radcliffe a week after me and followed us to Stoke Mandeville, and we have remained close friends ever since.

The ventilator was removed after 5 days and Ellie has not had any breathing problems since. Apart from a bout of bronchilitus, she progressed very well in hospital, and we were delighted to bring her home on 5 August 2014 (9 days before her due date), weighing 6lbs.

It was nothing like the pregnancy, birth or new baby experience that I had been expecting, and was actually the worst time in my life, although facing such a terrifying life or death situation has helped to put other things into perspective, including my subsequent divorce from Ellie’s dad.

The neonatal teams at both hospitals did an outstanding job of looking after Ellie and saving her life when she was born, and I will forever be in their debt, which is why I joined the Burps volunteer team to raise money for the neonatal unit at Stoke Mandeville.

Ellie is now nearly 2 and a half, and is progressing very well. She had 5 stays in hospital in her first year due to chest infections which she struggled to fight herself because her immune system hadn’t fully developed at 27 weeks gestation, but she is now much stronger and healthier. It is hard to believe the start she had in life when you look at her now, as she is very bright, switched-on, chatty, observant, funny, happy, smiley, sweet, adorable. I love her more than anything in the world and am so thankful that my story had a happy ending. 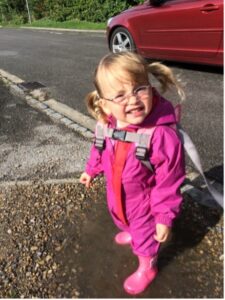