I was 31 weeks pregnant and busy at work when I went into unexpected labour. I had experienced what I thought were braxon hicks the night before (while watching the ‘Great British Bake Off’ final!), went to bed and had a really good night’s sleep but woke up feeling pretty tired the next morning. After wearily getting to work my busy day started with more of the ‘braxon hicks.’ After a while without really thinking about it I timed the pains, they grew to 10 minutes apart. I remember calling the midwife and subsequently the labour ward, and them saying that I needed to go in to be checked out. I asked them if it was really necessary for me to go and I could I just see how I felt a bit later!

Ultimately I went to the labour ward. By the time they examined me I was already 3cm dilated, and they only had time to give me one steroid injection. The next few hours went so fast I felt like I never really caught up with what was happening. I got to the hospital at 2:30pm and by 11:10pm my son Luca had been born, weighing 3lb 10oz. When I was told that I was in labour it was almost mind numbing and my worry was that I wouldn’t know how to give birth and breathe properly! I don’t think it really dawned on me how early he was and the impact of that. Everything happened so quickly, I really just went on auto pilot. I feel fortunate that I was able to give birth naturally; somehow this gave me some sort of comfort. One of the hardest things was not being able to hold Luca when he was born, the nurse did show him to me fully wrapped up, woolly hat included, and I remember vividly touching his nose. Then he was gone.

After he had been taken to the NICU I ate my toast and drank my tea, lay there just trying to delay going to see him. I think I was just not ready to face or understand what was happening and I was frightened as to what I would see. I think I was almost in shock at what had just happened. Once I had met him I really didn’t leave his side for the 5 weeks he was in hospital. The two weeks he was really poorly, he needed oxygen and had suspected NEC. This was really scary and it was terrifying knowing he was fighting for his life. I could only provide him with my milk and be there next to him while he did battle. It was heart-breaking every time I left him at night in the hospital and I went home. I breast pumped religiously as this was the one thing that I could control and do for him. My life was literally being with him at hospital and pumping! It was all consuming, draining, lonely and frightening.

When Luca recovered from the infection and began feeding he just turned a corner and grew stronger and stronger every day. Finally the day that we could take Luca home arrived, this was also really scary. The normal nesting process that is a natural occurrence was a mad panic getting everything ready for him to come home. I was so worried and anxious about him catching something as he was still so small and worried about his weight for weeks. We didn’t leave the house for about 6 weeks until winter had passed and he was stronger.

Eventually, Luca grew stronger and I learned to be a ‘normal’ mummy and we went out! As the weeks passed the normality of having a new born began. Now, he is a gorgeous nearly 3 and a half year old who doesn’t stop talking! He has grown and caught up in size and weight, he too has developed as any other baby would have done. Luca was an IVF baby born at 31 weeks, and now it a lively, fun, cheeky, bright little boy! 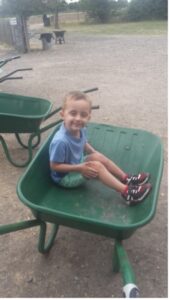 I look back on the experience now, in a bit less emotional way. I am now part of the local charity BURPS (Baby Unit Relative & Parents Support) who fund raise and support the local NICU at Stoke Mandeville, Aylesbury. I think it is really important to be there for any parents that need support at such a difficult time, and to be able to be part of a group that helps fund life-saving equipment.