We were so happy when we found out I was pregnant for the first time, a little half brother or sister for Sam, my step son. We went to the scan as a family of three plus bump! Afterwards I had the blood test they do at your 12 week scan and then off we went to celebrate and tell our close friends and relatives. About 10 days later I received a call from the hospital to say that my bloods showed up a very low Papp-a. I had no clue what this meant, I was at work and the conversation was all a bit of a blur but the midwife said that it can cause low birth weights and that my baby could stop growing but I would be under consultant care and receive extra scans and appointments. I tried not to panic and to remain excited, but from that day I was so worried all the time and feel like the happy pregnancy we all imagine was taken from me.

I returned for my 20 week scan and everything was on the 50th centile, just where we wanted it to be.

My next scan was at 28 weeks where my baby showed that the growth had slowed down a lot and they kept asking if I felt the baby move lots, but I never really did as she was quite a ‘lazy baby’ so they hooked me up to the ecg machine and everything seemed fine.

The next few weeks I had at least a scan a week by my consultant and many ecgs. All showing that my baby was ‘small’ know as intrauterine growth restriction (iugr) and that they deliver normally between 34-37 weeks. I had a few episodes of no movements, doing all the things to try and make her kick but nothing, so we where up at labour ward in the middle of the night a few times.

Then it was decided as I had lost quite a lot of my amniotic fluid, she was breech and stopped growing to deliver early by ceasarean. We chose a date for them to deliver which was strange, normally you have no control on your baby’s birthday, but I did. Then my consultant out of the blue had to explain to me that she could have a chromosome or disability and that could be the reason she had stopped growing! To say I was worried sick is an understatement but knew that I loved her so much already and it wouldn’t matter.

I had the steroid injections and a tour of the Neonatal unit to prepare me and then it came to the day our princess was born at 35weeks.
I was so nervous I could barley speak, it took ages for me to get on the bed for them to give me my spinal block, I was about to have my baby but hadn’t felt any labour pains, I just walked into a theatre room full of people, I feel like I completely cheated child birth because I have no clue what it feels like, it was the complete opposite to a water birth like I had hoped!

After a while we heard our baby cry, it was the most amazing sound but all I kept worrying was, is she healthy or has she got any of the life limiting disabilities that they had said about.

She was taken straight to NICU, I didn’t get to see her but they sent me a picture in a card when I was in recovery. I was back up on the ward and a midwife came to help me with expressing, it was very surreal trying to when I hadn’t even met my daughter yet, wondering how she was, who was looking after her, I had so many questions and desperately just wanted to be with her. I waited 7 hours before my dad and Kev picked me up and put me in a wheelchair to wheel me down to meet her. 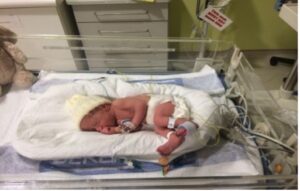 She was the most perfect person I had ever seen, although she was teeny tiny, like a doll she was bigger than the scans had predicted, weighing in at 4lb and half an ounce. We decided her name would be Libby.

The test results came back and she was fine, just needed help keeping her temperature and learning to feed.

Libby stayed in hospital for 2 weeks, which felt like months. It was heartbreaking having to watch nurses do all the little things I should have been doing, the first nappies, the first outfit, giving her the tube feeds and me having to go home at night without her.

Libby grew stronger each day and then the day finally came, we could go home! I was so excited yet nervous to be leaving the unit who knew the answers to all my questions. The neonatal unit do a fantastic job, day in day out, they are friendly, caring and try to lift your spirit always. We are forever grateful for the support and friendship they gave us in the time we was there.

Libby is now a happy healthy 19 month old who makes me the proudest I have ever been. We are still under consultant care for her heart murmur but are hoping to be discharged in the near future.

I decided to volunteer for this charity last year to give something back and I have met some other wonderful, strong mums who continue to fundraise to provide the unit with equipment which helps other babies to get better. 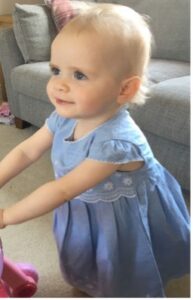