On the 29th September 2016 myself and my husband Neil went to our 12 week scan
which is when we discovered we were expecting twins! We already had Leo 7 and Mia 6
so we were doubling our brood, which was quite a shock. Other then the usual morning
sickness and a small bleed at 14 weeks my pregnancy had been pretty straight forward
with regular scans every 2 weeks due to the twins being identical so sharing a placenta. At
17 weeks we took Leo and Mia to a private gender scan, they were so excited to find out if
they would be getting baby brothers or sisters…we found out we were having girls, Neil
and Leo were going to be outnumbered! We went to asda on the way home so Leo and
Mia could pick an outfit each for when the girls were born.

Early hours of Wednesday 18th January i woke up to my waters going, I was only 27
weeks 6 days. Neil called his mum to come and sit with Leo and Mia, and we headed
straight to the hospital totally unprepared other then grabbing my maternity notes we
hadn’t taken anything with us. When we arrived at the hospital it was confirmed my waters
had gone. SMH NICU take babies from 28 weeks, so we waited to see if we would be
transferred to the JR, but with no signs of labour and only being 1 day short of 28 weeks I
was moved upto the ward and given the first steroid injection to help the girls lungs. After a
scan the plan was to keep the girls inside me and monitor for infection. All I could think
about was how long I would be away from my older children with an unknown time frame.
However my body had other ideas, by Wednesday night I was getting back pain, which got
more intense as the night went on. By 5 am I was having regular contractions and after
being seen by the doctor my husband Neil was called in, and I was moved straight down to
the delivery suite.

The next few hours were quite a blur, I remember having my second steroid injection and
the doctor administering magnesium sulphate to help the girls brains. We were taken into
theatre to prepare for a c-section, I think we were both quite overwhelmed by the number
of medical staff in theatre and the reality of how early the girls were being born started to
hit. Being 28 weeks pregnant we had no idea what to expect for our girls, and we were
both quite naive of the journey that lay ahead.

Abigail was born first and 10.20am weighing 2lb2oz, followed by Isla at 10.26am weighing
2lb4oz. It was certainly a different experience to when we had our 2 older children, there
were no cries or cuddles, the girls were taken to NICU and i was taken to recovery. Neil
rang family to tell them the news. After a few hours I was taken up to the ward, it was
strange as even though I was no longer pregnant, I had no babies with me. Neil went to
pick Leo and Mia up from school so he could tell them about Abigail and Isla being born.
He brought them into see me and also took them down to meet their sisters. Neil said how
amazing the nurses were, answering all their questions and letting them make name
badges for the girls incubators. I hadn’t met Abigail and Isla yet, the nurses sent Leo and
Mia back up to the ward with a photo of the girls for me to see, its only after the NICU
journey that we look back and wonder if taking Leo and Mia to see the girls so soon was a
good idea. How scary it must have been for them to see such tiny babies with tubes and
machines through a plastic window. 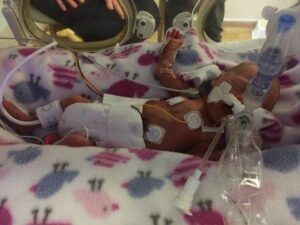 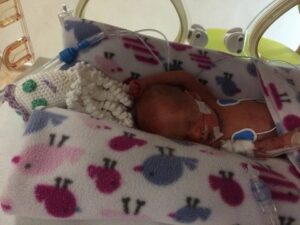 Due to having a c-section I was bed bound, at about 8pm I was taken down on my bed to
meet the girls for the first time. I remember being pushed between 2 incubators, with not
being able to get out of bed I wasn’t able to get close or touch the girls, it felt very odd to
think that they were mine, I was very dosed up on pain relief drugs so dont remember
much other than feeling shocked, I dont think i was fully prepared for how they were going
to look.

The next day Abigail was very poorly and needed to be transferred to the JR. I got
discharged so that we were able to visit both girls. Neil, Leo and Mia picked me up, it was
a horrible drive home I had left home pregnant, but come home no longer pregnant but
without our babies. It was hard knowing we had Isla in Aylesbury and Abigail in Oxford, as
parents we felt totally helpless and torn.

We tried to keep things as normal as we could for Leo and Mia, as we were aware their
little lives had been turned upside down and that we had a long journey ahead of us. We
would take Leo and Mia to school in the morning, then we would visit one of the girls in the
day and then visit the other one in the evening. Sometimes with Leo and Mia, but
sometimes on our own as we were very lucky to have the help and support of family and
friends.

Isla was 4 days old when I got my first cuddle with her, she was so tiny and fragile with so
many wires, so she stayed warm she was popped under my top with just her little head
sticking out. It felt so special to be able to hold her and kiss her little head, although I
wished that both girls were still growing safely inside me. The next day at the JR we were
able to have a first cuddle with Abigail, her little head stuck out of Neils t -shirt, she looked
so content snuggled up to her Daddy. We both felt pretty helpless there wasn’t much we
could do for the girls, I was pumping milk but due to the girls both having NEC they were
being fed TPN straight into their veins, but I knew as soon as they could have milk with 2
little bellies to fill we would soon get through it. I used to find pumping milk in the night
strange I would get up, pump milk, label it, put it in the freezer then go back to bed with no
little ones to burp or change, knowing someone else was caring for them. Both hospitals
were amazing we could ring at any time to see how the girls were doing, we used to ring
every night before we went to bed and as soon as we woke up in the morning.

They found Abigail had a hole in her esophagus and would need to remain ventilated for 3
weeks to see if the hole would heal. After about a week Isla also got transferred to the JR
both girls being at the same hospital made such a difference as it was easier to spend time
with both girls. After a couple of weeks we had the amazing news Abigails hole had
healed meaning she could be weaned of the ventilator. Abigail and Isla were transferred
back to SM, although Abigail clearly enjoyed the ambulance ride as she managed to get
transferred to JR nicu a further 2 times! The nurses used to say how feisty Abigail was,
she really was and that’s defiantly what got her through the Nicu journey, she certainly kept
the drs and nurses on their toes. Both girls were amazing little fighters, and Leo &amp; Mia
were amazing how they dealt with everything through out such uncertainty. Even though
they couldn’t cuddle their sisters they jumped into their big bro and big sis role they used to
take books in so they could sit by the girls incubators and read them stories. When Isla
was 9 weeks old she was oxygen and cannula free meaning Leo and Mia finally got their
first long awaited cuddle, its safe to say they have defiantly made up for lost cuddles since.

On Sunday 26 th March, mothering Sunday and certainly a very special one after 9 ½
weeks we got to bring Isla home. It was bittersweet as we were so excited to be taking Isla
home but also sad to be leaving Abigail at hospital on her own. The unit were amazing,
they kept a cot by Abigail for Isla to use when we were visiting Abigail. Once Isla came
home Abigail really started to make progress and on the 8 th April it was Abigail’s turn to
come home. It was very exciting being a family of 6 under one roof for the first time but
also felt daunting to be going it alone with 2 still very tiny babies, Nicu had become part of
our lives for the last 12 weeks it felt sad saying goodbye to all the amazing staff.
Abigail and Isla are now 4 they are happy and healthy little girls excited to be starting
school in September. We will always be so grateful to all the amazing doctors and nurses for saving Abigail and Islas life’s. Not only medically but also how they looked after the
girls with so much love and care throughout their time in hospital giving them the best
possible start in life, and all the support they gave us as a family. 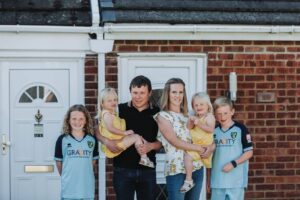